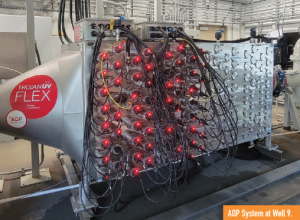 Advanced Oxidation Process (AOP) is the most technologically advanced treatment process and a proven solution that removes the compounds from drinking water. Construction of AOP reactors at Well 9 began in fall 2019, and at Well 6 in February 2020. Completion has made the wells compliant with New York State’s 1,4-dioxane regulations of a maximum contaminant level (MCL) of 1 part per billion; and for PFOA and PFOS at 10 parts per trillion.

All well sites throughout the District have Granular Activated Carbon (GAC), which removes certain chemicals, mostly organic, from water. Just 10 grams of granulated activated carbon (less than a third of an ounce), has a surface area equal to a standard NFL football field. That porosity is why GAC is ideal for eliminating emerging contaminants in water and that’s also why GCPWD has implemented this technology throughout the District.

“We have some of the most sophisticated water technology in the region,” said Commissioner Kenneth Borchers. “We brought our facilities up to the latest standards with the most advanced, state-of-the-art technology. By staying ahead of the curve, we were well prepared to meet the new standards before they were ever released.”

Water Treatment Upgrades at Wells 6 and 9